Midway through the fourth pass, and something that’s been in there since first draft caught me by surprise with “oh,Â that’sÂ how this will be relevant later.” Book, c’mon, you’re KILLING me.

I also yanked an entire scene out, and figure I can maybe use the character introduced there somewhere else, in a later book, maybe with a different backstory…or maybe not. Â Either way, it became really apparent that it, and she, didn’t belong where they were.

I also yanked a line one of my beta readers really loved. Â Sorry, Dori.

(yes, my third pass beta readers were Dori and Kari. Â I have been making dwarf jokes every since, because I get just that punchy in the last few weeks before deadline…)

Anyway. Â Deadline or Death! Â Or something like that. D-12 days. 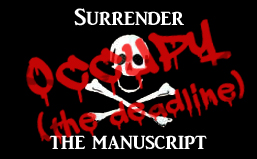 2 thoughts on “Just when you think you know someone….”