Today’s WiP darling: “She had grown up in proximity to the devil; power had been as present in the air she breathed as the sulphured smoke from the blacksmithâ€™s forge.”

2000 new words and I’m finally starting to feel, nearly 25,000 words in, that the plot’s starting to come together. After a decade+ of writing reasonably tight-to-outline books, I swear, this series is going to kill me. But process, it sometimes changes, and ya gotta just roll with it…

The rest of the day was admin stuff, broken by my printer’s new-found refusal to scan needed tax documents. Â Wine was opened, and sacrifices were made, along with some impressive-even-to-me cursing….

Tomorrow, I need to put the final polish on a short story before the editors hunt me down and take it from my hands, and then I’m of to partake of a Viking Feast. I have no idea what to expect, other than my own offering (semi-traditionally roasted root veggies), but hopefully the mead will allow me to stagger home at a reasonable hour, because on Sunday I’m one third of 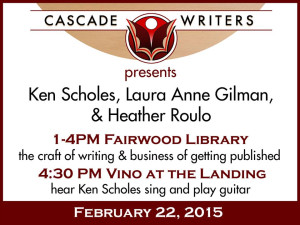 If you’re in the Seattle area, come, and bring your recording devices, because we’ll be Spilling All The Secret (and telling some entertaining lies)!
And then I get to stagger home and prep for an incedibly quiet week of All The Month-End-Shit-of-a-Short-Month. Â Wheeee?