So, a long while back (two years, more or less) I had a story out on submission. And an editor said “I like this, I want to buy it. But… we haven’t signed the contract for the anthology I want to buy it for yet so can I hold onto it for a while?”

And I – respecting and trusting the editor – said yes.

(okay, there was more negotiation than that, and a ‘pending contract’ and whatnot, but basically I said ‘yeah, you can have it for whenever you can publish it.’ Â Because you do that for editors you like and respect, and think would be a good match for the story.)

That trust paid off, ’cause today the anthology was Officially Announced. 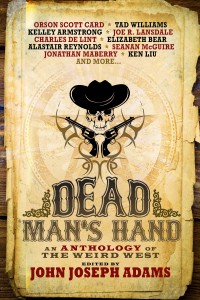 “Titan Books announced today that next spring it will publishÂ Dead Manâ€™s Hand: An Anthology of the Weird WestÂ (May 2014, Trade Paperback), an exclusive â€œweird westernâ€ anthology, edited by John Joseph Adams, that will include stories from many of todayâ€™s most talented authors, some new to the genre and others well-known to readers.”