Oh. Oh, hey. Lookit that! The 4th Sylvan Investigations novella, AN INTERRUPTED CRY, is up at Book View Cafe!

Danny Hendrickson â€” ex-cop turned PI â€” and his partner Ellen could be any low-rent private investigators trying to make a difference, and a living, in New York City.

Except Dannyâ€™s father was a faun, and Ellen is a storm-seer.

Which means that they bridge the line between human and fatae, between Talent and Null â€” and specialize in helping people who fall into the dangers betweenâ€¦

In â€œAn Interrupted Cry,â€ a blackout hits New York City. Talent â€” cut off from the current that fuels their abilities â€” are at a disadvantage. Already reeling from one of her visions, Ellen discovers that her partner/mentor, Danny Hendrickson, has gone missing, leaving a violent scene behindâ€¦

â€¦and the city is in the dark about whatâ€™s coming, in more ways than one. 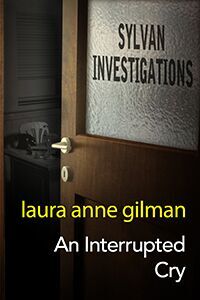 And remember, not only are books at BVC DRM-free, so you can read them anywhere, on any device you like, but 95% of all monies go directly to the authors (5% goes to support BVC, which is _kind_ of like it all going to the authors).

(this edition has been slightly and carefully revised from the Kickstarter edition.)